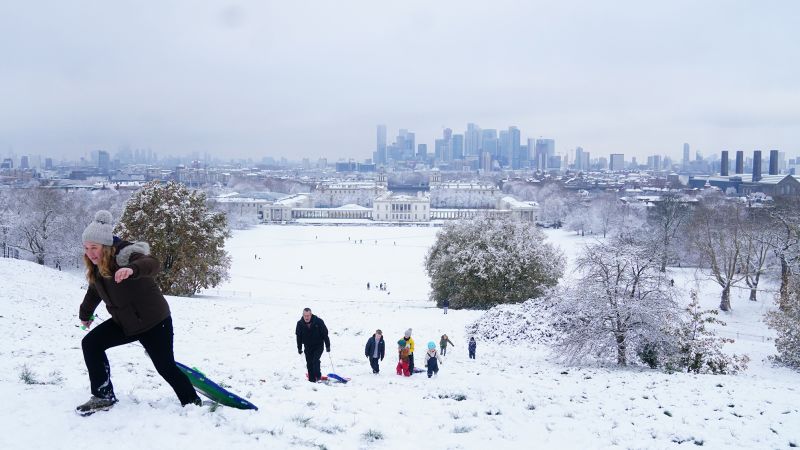 Snow covered much of London and England on Monday, closing schools, halting flights and causing widespread disruption across the country. Winter energy crisis.

The UK recorded its coldest day of the year early Monday morning, with minus 15.7 degrees Celsius (4 degrees Fahrenheit) recorded in northern Scotland, according to the Met Office.

In some places, drivers were encouraged to avoid driving and some were forced to abandon their vehicles. Heathrow, Gatwick and Stansted airports that serve the capital warned of delays and flight cancellations.

Despite the turmoil, a snowfall two weeks before Christmas put Britain’s parks and streets in a festive mood.

Snow is relatively rare in southern England compared to northern England and mainland Europe, and Britons frequently complain about the lack of preparedness of the country’s infrastructure when cold weather strikes.

Inflation and the energy crisis have added to concerns this year as household costs skyrocket and people worry about whether they can afford to heat their homes.

The PA said the company said it was an “urgent” plan aimed at “giving the public confidence in its Monday energy supply.”

Customers of some energy suppliers have been asked to reduce their consumption for two hours on Monday night in a pre-planned test being conducted by the National Grid.

West Midlands Police said three boys aged 8, 10 and 11 died in hospital on Sunday afternoon after falling into the lake. A fourth, his 6-year-old boy, is still in critical condition.

“Police are continuing to search the lake trying to determine exactly what happened and if anyone else fell into the water,” police said. statement on monday.